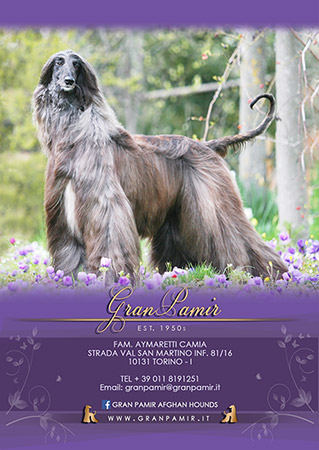 * 19th February, 2016
Welcome to our new website!! After one year of work, it is finally online.
We are still adding stuff, the site will be regularly updated from now on, come back soon!

"The Afghan Hound is an aristocrat, his whole appearance one of dignity and aloofness with no trace of plainness or coarseness.

He has a straight front, proudly carried head, eyes gazing into the distance as if in memory of ages past.

The striking characteristics of the breed-exotic, or "Eastern," expression, long silky topknot, peculiar coat pattern, very prominent hipbones, large feet, and the impression of a somewhat exaggerated bend in the stifle due to profuse trouserings-stand out clearly, giving the Afghan Hound the appearance of what he is, a king of dogs, that has held true to tradition throughout the ages."