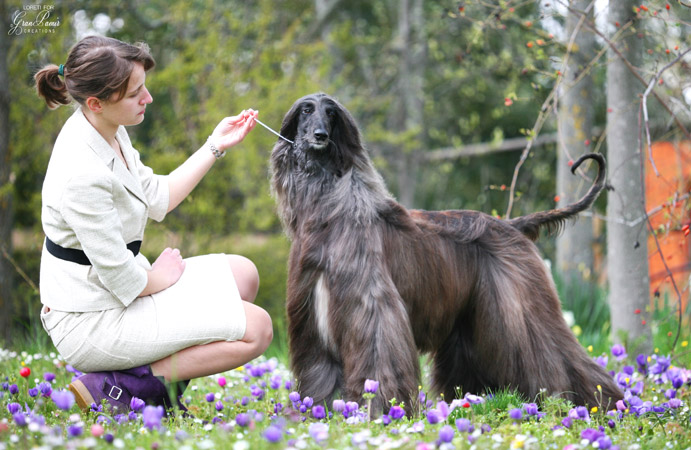 “Bellatrix” has always been quite impressive since she was a little puppy, making herself noticed among the others with loads of substance and style.

As for her show career, she had her show debut in April 2009 showing her heart out and going BOB & Group 2 at 12 months, too young for Cac. Her few outings as a youngster (in 3 different countries) also included a Jr CAC win at the Donaueschingen Winner Show in August and a CAC & SBOS at the Swiss Specialty in Lostallo, September 2009. Since then she stood in the rings, winning Specialty CAC CACIB SBOS over Multi Champions first weekend out in Italy in the adult classes, finished her Italian, Swiss (undefeated) and International titles in record time with multiple wins and almost undefeated, also earning the Spotlight both in Switzerland (5 shows – 5 wins – # 1 Afghan Bitch!) and Italy (# 2 Afghan Bitch). with Multi BOB & SBOB & SBOS Winner – Group Placings. As a mature girl she also managed to end 2013 as the # 1 Afghan Bitch in Italy with multi Specialty wins as a Special right before giving birth to her single-born son Tjuringa.

To us, she embodies the real Afghan Hound with her flowless style, elegance and dignified attitude, she always let herself be noticed winning ravishing and treasured critiques: “I love her. She’s the kind of bitch I’d bred from” (Mr Lou Guerrero, Genesis Knl, USA).

Bellatrix is the proud mother of a single baby out of Ch Khandhu Got The Look who is still young and being selectivley shown.

Huge thanks to Assunta Loreti for her dedication and work with Bellatrix, doubtless you are truly part of the Gran Pamir Team.